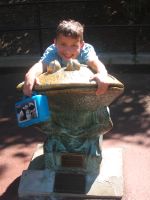 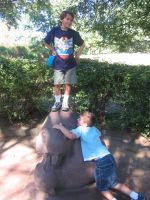 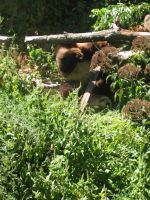 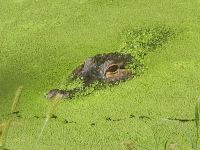 We had a great time at the zoo with Amanda and Patrick. Laura and Ian came along as well which made for a fun day. The weather was perfect and the animals were very entertaining. The best part about it though was that we weren't fighting off huge lines of people.

The panda was the funniest--he climbed out of the pool he was lounging in and then climbed out onto some old logs to sun himself. The logs appear to have been rotten through and some of them broken and started tumbling down the hillside with him on top of them. He stop his slide about 1/4 of the way down and then kind of let himself down the rest of the way, almost as if he was terribly embarrassed and trying to "recover" from such a social faux pax, kind of like what you must have felt like when you spilled the water at work your first week there. He landed at the bottom, munched on some bamboo shoots that were there, as if he had planned to lunch there all along, then rambled away back to the entrance into the Panda House. The picture of him is when he is almost to the bottom of the hill--on his head.
Posted by sostinkinhappy at 9/21/2005 04:17:00 PM