A Note from The Preschool Teachers 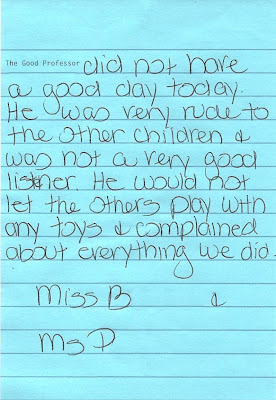 Yeah...tell me something I don't already know. I have piles of pictures kicking around where he looks 2 parts ticked off and 3 parts fed up with the rest of us humans in his life. He has been like this since the day he was born. Please, don't take it personally.
Posted by sostinkinhappy at 6/24/2009 07:39:00 PM No comments: 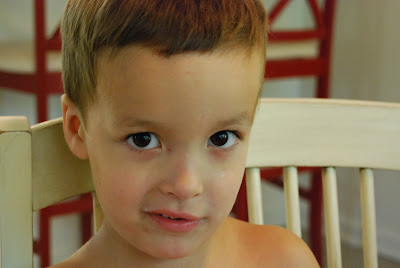 The Good Professor: I really don't like to be nice to B. He always wants to build tracks that don't connect.

Mr. Amazing Man: This is why you don't have any friends.

Many moons ago, before Mr. Amazing Man and I were married, I was at his mom's house playing "Star Wars Monopoly" with his family. I was still smarting from the residual effects of the dissolution of my first marriage and frankly, was a wee bit of an emotional wreck. Fortunately, my eventual in-laws are a kind, forgiving, and most importantly, funny group of folks and can find humor in just about any situation.

So there we were, playing a friendly game of Monopoly, me losing terribly like I always do at that game. At one point, I picked up a card from the community chest that said, "Obi Wan leaves you $100." My newly divorced brain interpreted that to mean that Obi Wan had left me -- as in divorced me -- and I had to pay $100 for the divorce.

I read the card out loud as "Obi Wan leaves you" and then tossed my $100 into the community chest with a resigned sigh. It wasn't until a turn or two later that MaryAnn turned to me and said, "Wait a minute - what did that card say???" and went rummaging through the stack for it. I was soon to learn that Obi Wan died and left me $100, like left me an inheritance of $100. He didn't divorce me, he died. I didn't have to pay $100, I got $100. One can only imagine the loud laughter and teasing that has ensued to this day.

Before all of you fall of your chairs laughing at me, I have to defend myself in saying that I had a very deprived childhood in that my mind was not stuffed to the hilt with Star Wars minutia. Also, I had not yet joined with the clan-who-spent-hundreds-of-hours-recreating-Star Wars-movie-scenes-with-small-models-and-their-dad's-hand held-8mm-movie-camera-while-nearly-setting-their-sister's-hair-on-fire. How was I supposed to know that Obi Wan was that old guy who dies in one of the movies? There were a lot of people who died in those movies.

So this whole story is to illuminate the fact that the family I married into are a bunch of bona fide Star Wars geeks. Like wait in line at premiers in costumes kind of geeks. (It's really quite charming actually). I also tell that story to give context to the incident that occurred this morning as I was folding laundry. From the living room, I hear The Good Professor singing his ABC's to the tune of the "Imperial March" from Star Wars. It only makes sense that he has taken a liking to all things Star Wars since he is Mr. Amazing Man's son. And has the same first name as one of the main character of the movies. And his middle name is the first name of one the actors in the films.