These Three Guys Walked into a Bar... 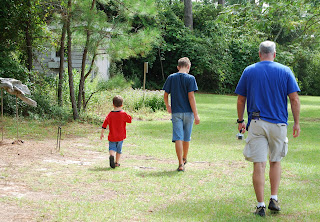 OK, so they didn't walk into a bar. It just sounded like a funny title for a blog post. And right now, I need all the funny I can get in my life.
But have I mentioned lately how much I love these three men in my life?
They take such good care of me, especially in my "delicate" condition.
On Monday, I was having on of my more "delicate" moments...ahem, I meant days. After dinner, they disappeared as I retreated to my bedroom with my Stay-Puf marshmallows and Nilla Wafers. If I could have had my way, I would have locked the door to and not opened it again until about 10:00 a.m. the next morning.
Unfortunately, I haven't gotten around to calling the base maintenance folks to come fix the lock on my door so the best I could do is slam it shut. Not that anyone was around to hear me except the cat. He jumped about 3 feet in the air and that made me feel somewhat better. 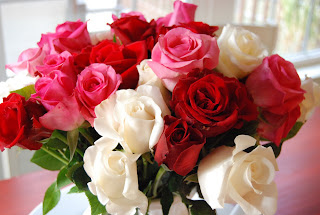 About 30 minutes later  the men folk reappeared, each one bearing a dozen plump, juicy roses. 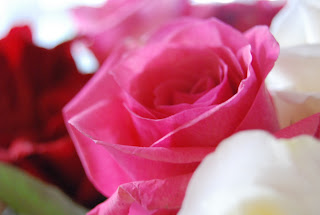 The little one brought me pink. 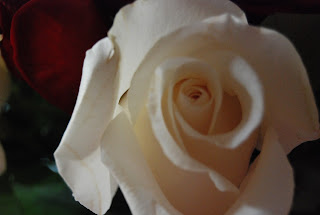 The middle one brought me white. 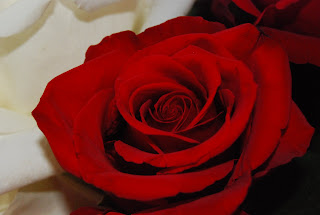 And the big one brought me red. They laid them in my arms like I was some beauty queen (which I certainly don't feel or look right now considering I only have 11 more weeks to go in this pregnancy) and told me how much they loved me and appreciated all I did for the family.  Then they each kissed me before retreating downstairs for some male bonding over season three of the original Star Trek series.
Now don't get me wrong - flowers can't fix everything that ails a girl but knowing that the men in my life love me even when I am a big fat stink pot made me feel a lot better.

A very pregnant and uncomfortable M. 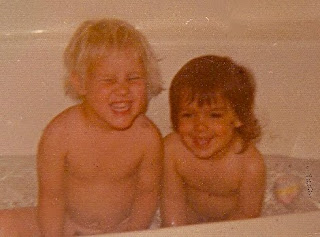 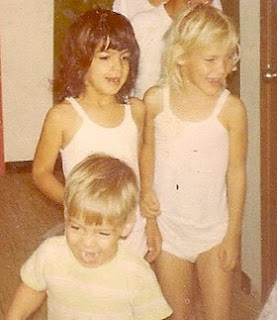 His One Flaw and an Easy Fix 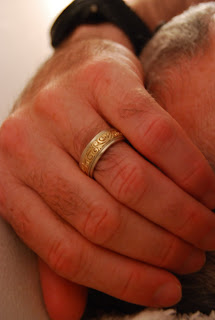 Finally!  I have discovered my husband's one flaw.  (Seriously folks, I didn't think he had any others aside from me, the perpetual thorn in his ever lovin' side).

But I digress: his one flaw is that he snores. Yes, I have discovered after nearly 8 years of marriage that even super heroes snore. Not loudly and not all the time. In fact, it wasn't until my pregnancy induced insomnia that I ever noticed it all that much. But now....Now it drives me to the brink of insanity on a nightly basis.

Since I am at heart a lazy person and I really really really like my bed and don't want to haul my bee-hind out of bed in the dark of night go find somewhere else to sleep, I have spent many an hour studying him by the light of the alarm clock as he lays there, peacefully snoring in dreamland. From my studied hours,  I have been able to ascertain that he only snores when he is (a) sleeping on his back and (b) his right arm is tossed carelessly above his head.  Not his left (as pictured above) - that doesn't induce the snoring. It has to be his right arm.  If he is sleeping there with his arms across his chest or to his side he doesn't snore - only when that pesky right arm is draped across his head.

In the past, I have poked and prodded and made him roll over to get him to quit snoring. It worked tolerably well except for the fact I had to wake him up and girls, let's face it: Even husbands need their beauty sleep. He works so hard for us during the day I always felt so guilty waking him up to make him roll over because his snoring was bothering me - it didn't bother him one little bit.

So over lunch yesterday I was teasing him about finally discovering his one flaw (which is fortunately not a fatal one).  He said, "Hey, next time I start snoring, just move my arm and see what happens instead of waking me up to roll over."  Brilliant! What a simple, elegant solution!!! Now why hadn't I thought of that?  (Just goes to prove that one can be a pointy-headed academic and still not be all that smart, if you know what I mean...)

Last night was the first night for me to try our little experiment.  Much to my delight and amusement, it actually worked! He starts snoring, I gently remove his arm from above his head and place it across his stomach. He stops snoring. Rinse and repeat as needed.

So I guess this means that he really doesn't have a flaw after all. He just needs me even more in his life to keep him from snoring if for no other reason. Right?
Posted by sostinkinhappy at 2/02/2010 08:36:00 PM No comments: