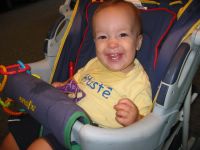 Smally-Pants waiting to go into pre-op this morning. He had the entire staff at the surgery center totally charmed and wrapped around his little finger by the time he finally went in for surgery. We made friends with Amelia who was "getting a new belly button, want to see my old one?" (a delightful 3 year old having having a hernia fixed) and Farhid from Ghana, a miracle boy of 5 who was born at 24 weeks gestation. He was having some reconstructive surgery done on his nose because of some damage from the tubing they used to feed him through during the 3 months he was in NICU.

He seemed to weather the event fairly well--he slept for hours and hours today once we were home. During the brief times he has been up has not wanted to be more than arm's length from me. When I was downloading the pictures I took this morning, he was laughing and giggling at the first few of him, the ones of him pre-op, but when I showed him the ones of him in his hospital "jammies" or with the nurses, he started shaking his head back and forth and saying, "nnnh, nnnh, nnnh, nnnh." At first I didn't understand what he was trying to tell me, then it dawned on me--the pictures reminded him of what had just happened and he was not pleased about it!!

What a smart little man. I think he is going to be a lot like his dad though--a man of few words but what he says, he truly means.