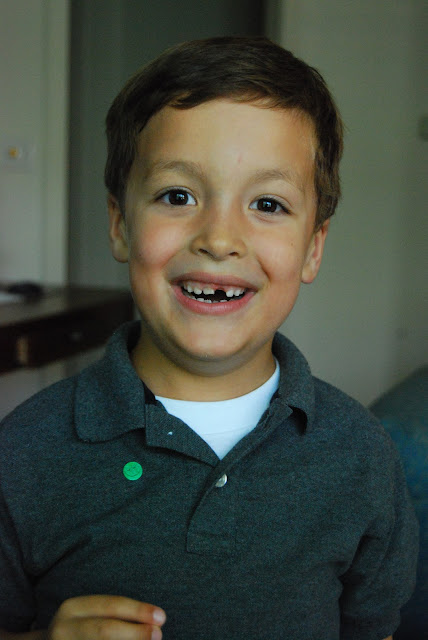 My little boy is growing up. I hate it but at the same time, I love it! I love watching him reach every new stage of development. What a kid!

Today he lost a tooth. Can you guess which one? The other front tooth next to that gaping hole is very wibbly-wobbly and it shouldn't be long before it comes out as well.

A story about the Professor and his teeth: Last Friday, I took him in to see the dentist at 7:30 a.m. Now why was I there at that crazy hour in the morning?

Well.....he had been complaining that his back teeth were hurting him for about two weeks. Then about a week ago, he started complaining (imagine that! Him, complain????) about his ear and jaw hurting as well. He would not even let me touch that side of his face without screaming as if I was poking him with a needle. After a few days,  I finally coaxed him into letting me take a look in his mouth and saw red, angry gums at the back of his mouth.

So when you see red, swollen, angry looking gums what do you think? I immediately assumed the worst case scenario (imagine that! Me, immediately assume the worse case scenario????). He must have a really bad cavity back where I can't see it. There must be an infection all through his tooth and gums and it is eating its way through the bone, making a bee-line for the cranial cavity where it will seep into the subacrachnoid space  and then rot his brilliant little brain and then he will die a horrible, feverish death all because I didn't take him to the dentist when he first told me it was hurting. (I am good at worse case scenarios, aren't I?  I like to call it "contingency planning." My husband likes to call it, "Woman, You Drive Me Crazy Sometimes." It is one the traits my husband simply *adores* about me! Not really, but I like to pretend it is.)

I called the dentist, described what I saw and what the Professor had been telling me. They made an emergency appointment for the next morning. Next morning, we showed up, me fully expecting the dentist to confirm my worst case scenario. Well, maybe not the full end-game, but that he had a cavity that needed to be taken care of.

The Professor hopped up in the chair and the very nice dentist (especially considering it was so early in the morning) came in, poked around in the Professor's mouth for a bit, asked him a few questions like, "How old are you, buddy?" and "Does it hurt just on this side or over here too?"

After about 30 seconds of peering into his mouth, the dentist said, "Mom, it's nothing to be worried about. He is just getting his 6-year molars. The swelling is just a normal reaction to the new teeth cutting through the gums. His teeth look great, no cavities or any other problems. Just give him some Tylenol to help with the pain."


Oh.
I should have known.
The Professor was THE.MOST.MISERABLE.CHILD when he was cutting his teeth as an infant. It took FOR-EV-ER for them to break through and he cried and whined (surprised?) and whimpered and wailed about each one for weeks on end. His gums were a swollen mess of awfulness and he was not afraid to let his parents know how terrible it was for him. It was horrible. I still shudder to think about those long, treacherous days and nights of trying to find something - anything - to comfort him.

Why would it be any different with his 6-year molars?

P.S. Strangely, the pain being caused by the Professor's 6-year molars was not even part of my "contingency planning."  I am so grateful it was just that and not anything related to my worst-case scenario.   Give me 6-year molars over cavities and root canals any day of the week!
Posted by sostinkinhappy at 7/10/2011 09:31:00 PM

Email ThisBlogThis!Share to TwitterShare to FacebookShare to Pinterest
Labels: The Professor