And The Dream Goes On 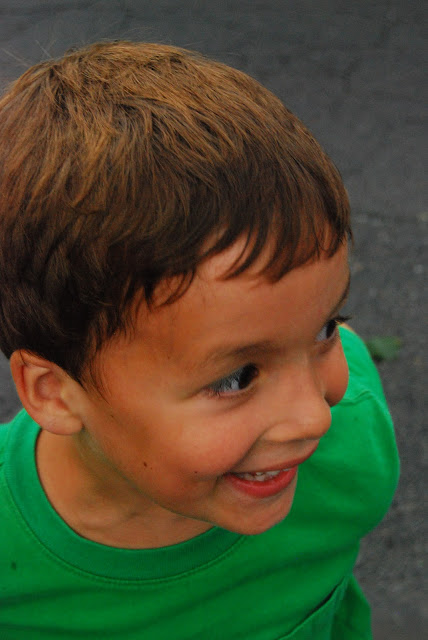 I know it is the 4th of July parade, Independence Day, our beloved country's 235th birthday. I know. But yet, my son wears green.  He wears green any chance he can because it is his favorite color and what better day to celebrate independence than letting your 6 year old wear whatever he pleases?
I snapped this photo of The Professor at the Lovettsville town parade and the look on his face...priceless.  He saw an old military deuce-and-half headed our way and just about jumped out of his shorts he was so excited. (It might have had something to do with the piles of candy they were pouring over the side).
He was positively delighted and delightful all evening long, full of exuberance and joy over every little red-white-and-blue tidbit of anything that crossed his path.
Giddy.
He was giddy. There really isn't any other word to describe him.
He was giddy about everything that day except the flag cupcake cake thingy someone brought to the BBQ, which was just a step above being worthy of enshrinement at www.cakewrecks.com. It had 16 stripes. For the 16 original...uh...yeah, those 16 original thingies. And it had something like 57 stars for the 57....uh...states?
The real story isn't about the cupcake wreck though. It's about The Professor's reaction when he saw it. It was announced that people could start eating the cupcakes, and being the carbohydrate addict he is, he made a mad dash and was first in line. When they lifted the lid, he looked at it, backed up while holding his hands up and solemnly declared loud enough for everyone at the BBQ to hear:

"I can NOT eat that cake! It is the American flag and that would be un-respectful!"

He then darted back to the field to throw the giant frisbees around with his cousins.

I sat there stunned and wordless.

This is my child who knows that National Doughnut Day exists and incessantly reminds me about it during the lead up to it every.stinkin.year (It's the first Friday in June, in case you were wondering. Stop by your local Dunkin Donuts and get free donut!)  This is my son who would eat cake, cookies, and bread for every.stinkin.meal with a side of frosting and a glass of chocolate syrup to wash it all down if I let him.  Seriously, The Professor NEVER turns down a baked good.

One of the ladies who was there leaned over to me and said, "Did you teach him that or did he come that way?"

This little boy is the product of generations of Americans stretching back to the earliest European settlers of Massachusetts and Virginia. He is the descendant of intrepid individuals willing to do difficult and dangerous things in an effort to establish this country. His is a heritage of patriots and warriors stretching back to the Revolution who were willing to sacrifice all they had to protect the freedoms we enjoy today.

If they were to examine his blood under a microscope, they would probably find stars and stripes in stead of red blood cells and plasma. Have you ever heard the phrase "he bleeds red, white, and blue"? That's my boy they are talking about.

Yes, he came that way.

And I am very grateful that he did.

Email ThisBlogThis!Share to TwitterShare to FacebookShare to Pinterest
Labels: 4th of July, The Professor

I love this post, the verbal pictures you paint are priceless. What a sweet experience. I got goosebumps reading it.

Also, my Adam's favorite color is also green. He loves green everything, which come to think of it, so does Grandpa Harrison.