Something you hope to never have to do in your life. 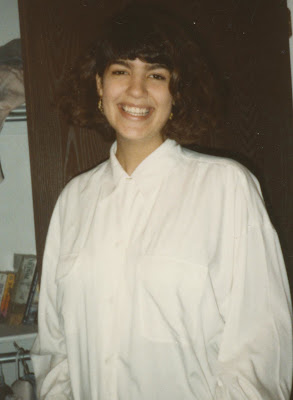 Forgive the hair and the eyebrows in that picture of me from April, 1992.  I have no excuse for either of them.  And the shirt button up to my neck? What's that all about?
I have avoided this day for a long time because I haven't known how to write about this topic.
Most people have responded to this theme with, "Lose a child."  I would say the same thing, except it has already happened.
You see, in that picture there, I am seven months pregnant with my first daughter.  I had her in June 1992 and parented her for nine deliciously happy months. Unfortunately, I allowed my culture and my religion to convince me I was not a good parent simply because I was single and that she deserved more than me. So, in spite of my better judgment and because I trusted people I have since learned I should not have trusted, I relinquished her for adoption.
Yes, she is with a good family. They have loved her well and taught her well. For that I am grateful, especially since that outcome could have been far, far worse.
But I still lost her.
She is still just as gone as if I had buried her that blustery March evening exactly 18 years ago today.  My arms are just as empty and my heart just as sad as any mother who has lost a child to death.
However, instead of condolences and gentle caring treatment by my culture, I get blame and shame heaped on me that I chose this, that I should be happy about it, and that frankly, I deserve this pain. There are some who say I should be proud because I made such a courageous, unselfish choice and that I should be grateful to have been relieved of the "burden" of parenting on my own.
Make no mistake about it. I was not courageous. I cowed to the cultural belief that a single parent = a bad parent. I was not unselfish -  I chose my church leaders' good opinion of me over my daughter.   I was not relieved to no longer be parenting my precious daughter. My daughter was never a burden to me. Quite the opposite. There is not one single thing I regret about how I parented her during the eight months and twenty-nine days she was with me. Nothing.
I am not proud, not in the slightest. I am not grateful.
I have spent every day over the past 18 years wanting to undo what I did by relinquishing her for adoption, wishing I had had the courage to be selfish on behalf of my daughter. I wish I could have had the courage to tell every single one of those people I am enough.
But what's done is done - it is what it is. She deserved a mother that would fight to the death for her, that would move heaven and earth to be with her.
Instead, she got me.

Email ThisBlogThis!Share to TwitterShare to FacebookShare to Pinterest
Labels: 30 Days

Oh please don't be so hard on yourself...I completely understand every one of your thoughts and feelings in this post because it parallels my story closely, but please don't say she deserved anything other/better than you. You did what you believed at the time to be the best thing for her and that is a good mother. Granted it was based on what other people told you, I did the same thing, I believed them that my son would be better off without me and I have paid for that decision every day since, but you did what you did because you believed at the time that it was what was best. Hugs to you on this emotional day!

You love her so much. That is completely clear. I am sorry that you had such terrible pressure; that shouldn't have happened. It is horrendously sad when patriarchal beliefs are used to justify things that have no real justification. You are her mother, then and always. She has another family, sure, but she is still your daughter. There is no erasing that.

I am sorry for your pain. You deserve none of it. I wish I could change things for you, and I hope one day she will once again be integrated into your family and life, and can accept the love that you give so generously.

I can see how this loss is so similar to death, only worse, perhaps. She is still there; close, but not reachable. Damage is done. But I know you are strong in your beliefs, and in that I have hope that things will change for the both of you.

I was a bit dissapointed to learn that the end of the public status of LtMsFF did not involve a stage of "reunion", just a stage of so called "healing", which is very a good thing in itself too and something to be glad about. Thank you very much for explaining that.

Yes, you did get a very unfair deal.

But let me assure you there is nothing wrong with your eyebrows in that picture at all...

Teddy, who has to say a lot more, but has promised not to bother you too much before April.

and without you ... well, she wouldn't BE.
You're allowed hurt, anger, sadness, frustration - grief is like that and dangit, it doesn't go away because you've checked all the boxes for the stages, done them in order, done them again, gone back for a do-over on that stage (again). Grief is like pictures from the past, always there.
And frankly, you're not cowed NOW.

It makes me sad that anyone ever guilted you into believing that you were not enough for you daughter.

Even though I was only in Jr. High, if I were your caseworker I would have told you you have every right to parent your child. God gave you stewardship over this child and he trusts you to give her what she needs. I wish I could have been there to fight for you and your daughter. As her mother you had the right to determine her and yours future without coercion or guilt. Frankly, what was done to you was spiritual abuse. No one should use your religion against you to make a choice that feels unnatural to your very being.

Thank you all for you kind words. Back at the beginning of this journey, I thought it wouldn't hurt as bad all these years later. That's what the professionals told me- I would heal and move on. However, I have realized that losing a child to adoption is much like having someone go missing in action during a war. There is never any real resolution and the sorrow seems to compound throughout the years, *especially* as the myths surrounding adoption start to come unraveled as we parent other children through harder situations than the one we were in.

I wish I could have been the fierce warrior mama I am now for her back then. I *thought* that's what I was doing. Hopefully it counts for something, right?

I still remember that night and have cried over it a few times. I wish I could have been a better shoulder and strength for you. I sure do love you. ANd when she's old enough, you'll get to tell her yourself what you went through. She's a smart girl and will come to get to know you and learn from you. Let me know if you ever want to talk about it.

Thanks, Amy. I just wish I knew then what I knew now but isn't that the story of all of us?